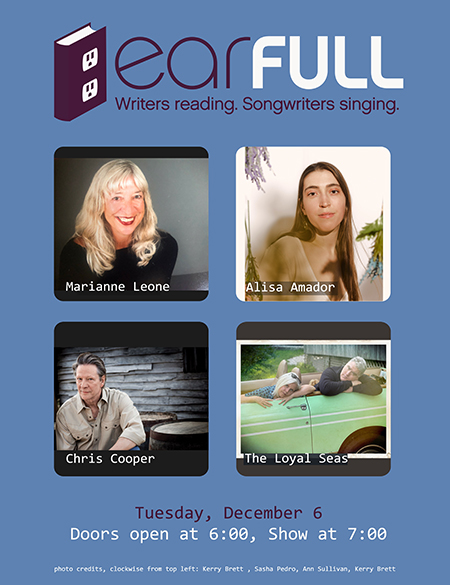 EARFULL is a performance series featuring writers, and musicians doing their respective things in an intimate setting. WRITERS read from their new books, or about-to-be books, or right from their crumpled up notes.  MUSICIANS range from harpists to horn blowers, from solo songwriters to full-on rock bands. EARFULL EVENINGS offer food & drink at the venue, and time between acts to socialize. On December 6, there's a TWIST -  for the readers, we welcome two artists (who also happen to be married): author/actress Marianne Leone and actor Chris Cooper, who will be reading/performing from writing by Marianne and others. The night will also feature musical acts Alisa Amador and The Loyal Seas (Featuring Tanya Donelly and Brian Sullivan). More about Earfull at https://earfull.org/.

Marianne Leone is a film and television actress, a screenwriter and an essayist. She’s the author of Jesse: A Mother’s Story and Ma Speaks Up & A First-Generation Daughter Talks Back. Her essays have appeared in the Boston Globe, Lithub, Solstice, Coastal Living, Bark, Post Road, and others. As an actor, Marianne has had a recurring role on HBO's The Sopranos as Joanne Moltisanti (Christopher’s mother), and has acted in films by John Sayles, Larry David, Martin Scorsese, Nancy Savoca and David O. Russell.
https://marianneleonecooper.com/


Alisa Amador believes that “music can create this intangible space where everyone belongs...where we’re just people with all of our complicated, beautiful, painful lives.” She is this year’s winner of NPR’s Tiny Desk Contest with her first entry in Spanish with her song “Milonga Accidental” an ode to in-between-ness, to feeling split between cultures and languages. NPR Tiny Desk Concert creator and judge, Bob Boilen, calls Alisa a singer-songwriter “with a powerful voice whose tender performance commands attention and fosters connection.” Her upcoming EP, Narratives, is a deep look at a person stumbling through life in two languages and in many states of mind about it all.
https://alisaamador.com/about

Chris Cooper is an Oscar-winning actor who has brought his laconic, folksy presence to dozens of movies, including American Beauty, October Sky, The Bourne Identity, Seabiscuit, Capote, and Little Women, as well as acting in the John Sayles movies, Lone Star and Matewan. In 2003, Chris won an Academy Award for Best Supporting Actor for his portrayal of John Laroche in the movie, Adaptation. During the pandemic, he directed and starred in With/In (opposite his wife Marianne Leone who also wrote the piece) as part of a compilation of actors and writers giving their unique take on sequestration. Chris most recently wrapped Boston Strangler opposite Kiera Knightly for Disney/Hulu.
https://www.imdb.com/name/nm0177933/


The Loyal Seas pairs Tanya Donelly, founding member of Throwing Muses, Breeders, and Belly, with New England cult-favorite Brian Sullivan, who has worked under the moniker Dylan in the Movies since the mid ’00s. Donelly and Sullivan first met in the mid ’90s at famed Boston recording studio Fort Apache Studios and became instant friends. They’ve collaborated many times over the past few decades, appearing on multiple American Laundromat tribute compilations, as well as a couple of co-writes for Donelly’s solo Swan Song Series. The Loyal Seas’ dynamic full-length debut Strange Mornings In the Garden was released on May 20, 2022, on American Laundromat Records.
www.alr-music.com/collections/the-loyal-seas