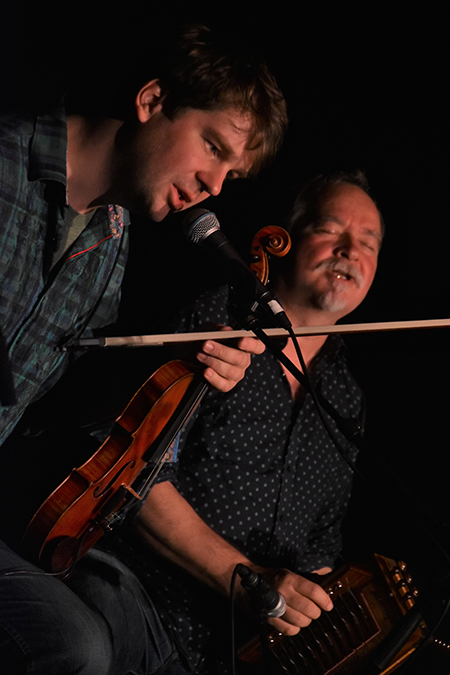 Sonnich Lydom and Kristian Bugge will guarantee you an entertaining and variated journey through the traditions of Danish folk music. This lively group performs old dance tunes and songs from every corner of their Scandinavian home country. From rural islands like Læsø to the metropol Copenhagen, including a few of their own compositions. Expect everything from wild polkas and jigs to lyrical waltzes, fiery reels and happy hopsas, plus the exotic “Sønderhoning” dance tunes from the famous Island of Fanø, and long forgotten songs from all over the country. An unforgettable live experience spiced up with humor and stories from their many years on the road..

Gangspil have toured intensively and played more than 120 shows in North America since 2015!  - as well as a good number in other parts of the world. The group has become a well-known name in trad- and folk circles both home in Scandinavia and abroad. In 2016 they received the "Tradition Award" at the Danish Music Awards (Danish Grammy). We are delighted and proud of that, it has been great to play for you all!

Sonnich (accordion, harmonica, vocal) is a master of Irish, French-Canadian, and especially Danish traditional tunes. During the last 25 years he’s been leading the revival for diatonic accordion and harmonica in the Danish folk music. Sonnich holds a special place in his heart for the music from the Western Island of Fanø, where his family is deeply rooted.

He is best know from his work with the ULC trio and later quintet ULC recieved the Danish Music Award in the category "Folk Album of the year" in both 2001 and 2004.

Kristian (fiddle, vocal) has specialized in the strong Danish folk music traditions. He is very active on the Danish and Scandinavian folk music scene as well as in the rest of Europe and North America, both as a musician and teacher.

His debut CD was awarded "Danish debut of the year" and "Danish Folk Instrumentalist of the year" at the Danish Music Awards Folk 2006. At the same occasion in both 2012 and 2016, Kristian recieved the award as ”Danish Folk Artist of the Year!” More info: www.kristianbugge.com

Both Kristian and Sonnich were amongst the first twelve musicians to recieve the honorary title ”Danmarks Rigsspillemænd” (National Danish Folk Musicians) in 2014. When they perform together, they will also talk about the traditions from back home, how they learned and how the music lives on today and is part of the famous Danish hygge!

The band began as a trio back in 2012 and then became a duo in 2017. That has given us the opportunity to dig deeper into the unison playing that is at the core of our music. It has also given us the opportunity to play with many different musicians, who each contribute an extra dimension. The new album features many such friends and for the trip to Folk Alliance we'll be bringing pianist and harmonium player Malene D. Beck along.

They released their new double- album, ”Gangspil 2”, in November 2019!

The U.S. release was celebrated during a three week tour along the east coast. Only after that, the Danish/European release took place at the Copenhagen Folk Club on December 28th 2019.

Samples can be heard via:
www.soundcloud.com/kristian-bugge