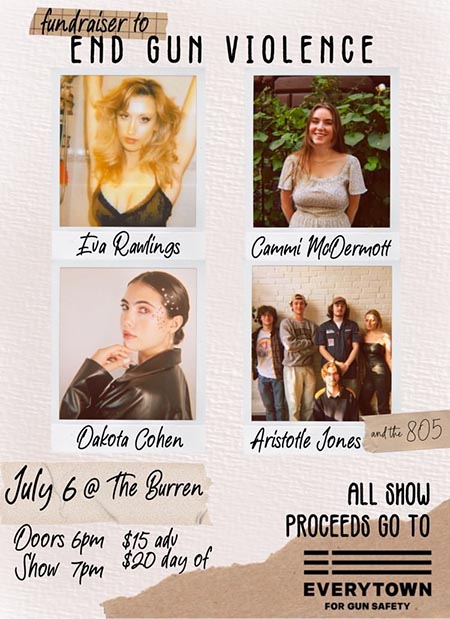 Cammi McDermott- Born and raised in Washington D.C, 22 year-old singer-songwriter Cammi McDermott has been blowing audiences away since the age of 10, when security guards would sneak her into a local bar to perform at their traditional live band karaoke. With a one-of-a-kind voice, intelligent lyrics and a unique sound with influences ranging from Taylor Swift, Phoebe Bridgers and Glen Hansard, Cammi has stood out - not only in her local music scene, but also at the highly regarded Berklee College of Music, where she currently attends.

After posting several covers and LGBTQ+ re-writes of Taylor Swift’s songs, as well as her own original music, Cammi McDermott has gained a notable fan base on her TikTok account (@swiftbridgers), totaling over 33K followers. She has also been highlighted on NPR’s Tiny Desk Contest “Top 25 Massachusetts Entries” with a video featuring her debut song “Bad Habit”.

Eva Rawlings- Eva Rawlings’ songs paint a picture of how every woman should feel: confident and fearless.  The lyricist pulls influence from Lana Del Rey to BROCKHAMPTON, using her music to help herself and others feel powerful, even when they don't. Before attending the highly acclaimed Berklee College of Music for songwriting, she released her first EP, Control Freak, followed by two singles, "Siren" and "Tell Me What You Like" while playing the biggest venues in her home state of Vermont.