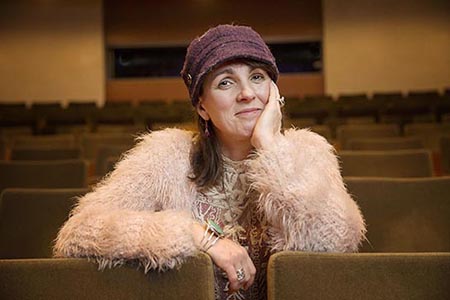 Karan Casey - Legendary Irish folk singer Karan Casey has released 11albums to date. She has toured extensively throughout North America, Europe and Japan, singing songs charged with a sense of social responsibility in a career spanning over 25 years. Karan is joined by Niamh Dunne on fiddle and vocals, and guitarist and accordionist Sean Óg Graham (both of the Irish folk band Beoga). The evocative trio have toured together for several years and this show premieres new material developed and recorded since the start of the pandemic as well as favourites from Karan’s back repertoire. The songs draw inspiration from a wide range of sources from the personal to the historical and political, touching on themes of family, loss, love, the empowerment of women and Irish revolutionary struggle.

Karan's evocative trio featuring Niamh Dunne and Sean Óg Graham premieres new material developed and recorded since the pandemic as well as favourites from Karan’s back repertoire, drawing inspiration from the personal to the historical and political, touching on themes of family, loss, love, the empowerment of women and Irish revolutionary struggle.

Karan Casey has long been recognized as one of the most innovative, provocative and imitated voices in Irish traditional and folk music. Singing songs charged with a sense of social responsibility in a career spanning over 25 years, Karan has released 7 solo albums as well as an album for children, a duet album with John Doyle and numerous contributions to other artists' projects. She has toured extensively throughout North America, Europe and Japan, performing with her own band as well as collaborating with numerous diverse musicians. In 2017, Karan was Traditional Artist in Residence at University College Cork, toured the UK with the Transatlantic Sessions, performed at Glasgow’s Celtic Connections, and toured in the US both with her own band and with Lúnasa, including a performance at New York’s Carnegie Hall. In 2018 Karan helped found FairPlé, an organization aimed at achieving fairness and gender balance for female performers in Irish traditional and folk music. Currently she is recording and touring as a trio with her Irish bandmates, Niamh Dunne (fiddle and back vocals) and Seán Óg Graham (guitar and back vocals).
https://karancasey.com/


The Carroll Sisters are a Celtic fiddle band most known for their lively traditional tunes, beautiful harmonies, intriguing counterpoints, and unique musical arrangements on fiddle and cello. This Connecticut-based youth band has performed in intimate settings such as pubs, farm festivals, house and (pandemic-inspired) driveway concerts, as well as at larger events like Sober St. Patrick's Day in New York City (2018) and the Boston Celtic Music Festival (2022). Their 2022 debut album (Daybreak, produced by John Whelan) has been critically acclaimed and featured in Irish Music Magazine, Irish and Celtic Music Podcast, Celtic Life International Magazine, The Irish Echo, and Boston Irish Magazine.