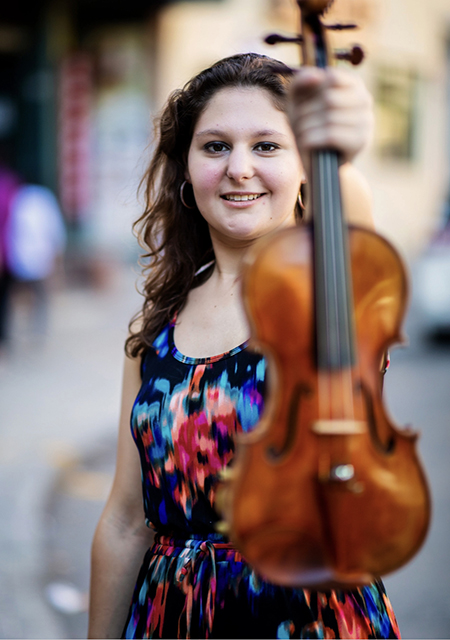 -Jewish-American violinist Ilana Zaks has performed with numerous orchestras including the Boston Civic, Rhode Island Philharmonic, and Cape Cod Symphony. Since 2013, she has been a member of the Perlman Music Program in which she has been studying with legendary Itzhak Perlman. She has also participated in masterclasses with Augustin Hadelich, Kim Karshkashian, Michael Stern, Alon Goldstein, Hagai Shaham, Soovin Kim, Benjamin Zander, Joel Krosnick, Vivian Weilerstein, Peter Salaff, Nicholas Kitchen, David Stern and Katharina Wolff. She also studied with Donald Weilerstein for 12 years at New England Conservatory.

As an entrepreneur, Ilana’s passion resides in creating theatrical multidisciplinary collaboration, breaking the stereotypes of modern musical experiences through inclusion of contemporary works by women, popular recital works, and works she commissions. Her Jewish identity inspires her to advance tikkun olam through creating community within a diverse group of people through educational accessibility and the advancement of gender equality and representation of women in leadership roles.  An advocate for contemporary music, Ilana won an NEC EM grant for her commissioning project of four violin and percussion duo works featuring multidisciplinary collaborations. The result of this project was her debut album and first ever visual album "The Persistence of Memory", which was released on Amazon Prime US and UK in July 2020. In Spring 2020, Ilana won BMOP's 2020 Concerto Competition, and directed and designed her second film and multimedia production, Flying Forward, featuring The Kairos Dance Theater, an all female orchestra she founded, to perform Jennifer Higdon's Violin Concerto. Currently pursuing her Master’s degree at Yale, she was an artist fellow at Yale’s Center for Collaborative Arts and Media (CCAM), in which she directed, and recorded the music for her third film, The Intermedial Performer, available on YouTube. In the summer of 2021, in addition to being a featured artist at the Boston Public Library's Concerts in the Courtyard series, Ilana was a Presidential Public Service Fellow at Yale where she worked in community outreach, education and social justice/arts and cultural programming. In 2021-2022, she is a Young Concert Artists Semifinalist, a Blended Reality fellow at Yale's CCAM, violin teacher for secondary lessons and the Music in Schools Program at YSM, an intern at the Good Life Center at Yale Schwartzman Center, marketing coordinator for Yale Center for Biomedical Innovation and Technology, and a media and public art coordinator for the New Haven Department of Arts and Culture.
https://ilanazaksviolinist.wordpress.com/

Doors are at 2:30pm. Showtime is 3pm.  Dinner and drinks available at all tables.