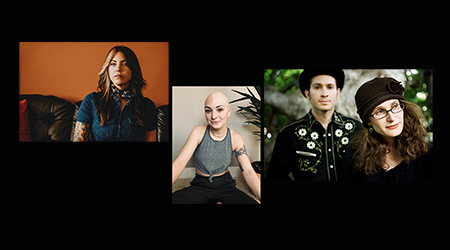 With a voice that cuts to the bone and songs that pull on the heart strings, Emily Barnes has the ability to turn any room into a listening room.

With a diverse four albums and many miles under her belt, Barnes is a seasoned singer-songwriter who continues to build a grassroots following from city to small town, one new believer at a time. Her most recent release, Rare Birds, thrust her onto the national stage including a trip to the highly coveted Kerrville Folk Festival. Now based in Colorado, Barnes writes vivid songs of empathy, love and perseverance over lush melodies.

There is a feeling one gets when witnessing something authentic and rare, and that aura permeates the room at an Emily Barnes show.
https://www.emilybarnesmusic.com/


Lily DeTaeye is a Des Moines native, harmonica-wielding singer songwriter signed to Station 1 Records. She is a prolific writer with a captivating and powerful voice, seamlessly blending her musical influences of folk, indie-rock, blues, and jazz. Lily has been traveling the highways of the American Midwest touring solo and with her band. Her full length-album, “BiTe Back” is the culmination of over two years of writing, recording, touring, studying, and storytelling across hundreds of shows and thousands of miles. Recorded at Public Hi-Fi in Austin, TX, “BiTe Back” is out now.
http://www.lilydetaeye.com


Sweet Wednesday - The sailor and the dancer, the young girl stranded along Route 66 at dusk, the refugees who turn into ravens...Sweet Wednesday's songs spin
tales that allow the listener to peek into the human soul in its most
intimate and magical moments. From the moment singer/songwriters Dave
Falk and Lisa Housman met, they knew there was a songwriting, performing
chemistry at work. Since forming Sweet Wednesday in 2006, the duo has
released four albums to critical acclaim, toured extensively as an
acoustic duo and with their full band, and been featured on radio and
television programs throughout the U.S. and abroad.
http://www.sweetwednesday.com

Doors are at 11:30am. Showtime is 12pm. Dinner and drinks available at all tables.