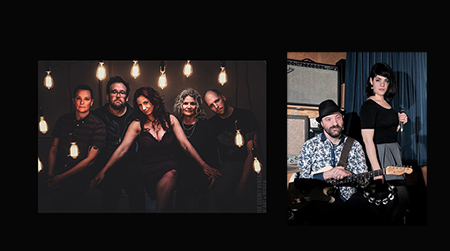 Magen Tracy & the Missed Connections are a fierce, feminist five-piece from Boston, MA soulful vocals, poignant songwriting, and piano-driven pop-rock with a dash of sleazy swagger and alt-country twang. In the words of one fan: “It’s like if Tori Amos and Lucinda Williams made out.”

A veteran of the New England singer-songwriter circuit and a busy side-player in the Boston rock scene (Band of Their Own, Kay Hanley, Juliana Hatfield, Lifestyle, Nate Leavitt Band), Tracy first brought her bittersweet ballads and audacious anthems center stage in 2015 with a solo EP, Fiercely, produced by Nate Leavitt. Since then the band has become a staple of the Boston music scene, featuring such in-demand Boston players as Stud Green (Humble Tripe), Tamora Gooding (Gene Dante & the Future Starlets, Axemunkee), Mike Oram (Juliana Hatfield, Abbie Barrett Band, Eric Salt & Electric City, Cujo, Andrea Gillis Band), and Sam Spencer (Sera Del Fuego, Milling Gowns). In 2019, they released their first full-length album, Long Fuse Burning, described by The Deli New England as "an indie-folk carnival for the senses." The album was recorded at Q Division Studios and produced by Ed Valauskas with additional tracks produced by Craig Small, and earned the band Boston Music Award nominations for Singer-Songwriter of the Year (2019) and Americana Artist of the Year (2020).
www.magentracymusic.com


Lady Lupine is a Boston based heavy soul band that delivers high energy performances of unique original material. The band creates an engaging live experience by cultivating visceral connections through sound. Fronted by vocalist, Christina Lacoste, Lady Lupine draws inspiration from the soul of Amy Winehouse, and the sonic eclecticism of Portishead. Traces of Vulfpeck's tight, technical funk, and Jimi Hendrix's fuzz rock grooves can be heard in the band’s sound as well. Christina, guitarist Fran McConville Jr., and drummer Josh Cuadra met in 2010 while performing in a band called The Elements. Originally from California, Josh came to Boston to study at Berklee school of music. Christina and Fran are both Massachusetts natives who took interest in the local Boston Music scene. The three were drawn together by their compatibility as performers, and continued to play music on and off throughout the years, usually under the name “Christina and Fran”.