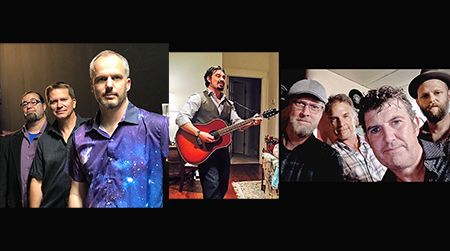 Jamie Dunphy and True North features three seasoned musicians with a long history in the Boston music scene: Jamie Dunphy (Mill City Trio, Jamie Dunphy Band), Seth Peterson (Electric Standard, The Gone Boys, Capital 6) and Tod Salmonson (The Snap Daddies, Dr. Smigley's Baby). The trio formed in June of 2018 and have been performing regularly since at Boston-area venues including the Burren Backroom, Once Ballroom, Lilypad Inman, Uncharted, and the Chelmsford Center for the Arts. In January, 2022, the band released their new single, I'm Still Here, which Stereo Stickman called "a timeless pop-rock anthem, perfectly timed and beautifully crafted." In May, 2021, the group released their first full-length album, Dark Night Bright Morning, which featured the hit singles The Girl in the Boat and The Great Divide. The album garnered much critical acclaim: "A superbly crafted pop-rock CD" -Roots Music Report. "A gorgeously enjoyable, interesting and professionally crafted album from a band with a timeless authenticity to their sound." -Stereo Stickman. "A perfect album for our times." -Metronome Magazine. "The band combines expert musicianship with a folk singer's style and a keen appreciation for the hook." -The Static Dive. In March of 2019 the band released their debut EP, No More Waiting, which Metronome Magazine called “nothing short of ingenious,” citing “brilliantly crafted lyrics and magnificent guitar work.”
https://www.facebook.com/jamiedunphyandtruenorth

The Splendid Nobodies play the hell out of their instruments and songs.” wrote the Boston Herald upon the release of their debut record “Coming Back Around.”  They described the Nobodies' sound as "equal parts Carl Perkins, the Flying Burrito Brothers and The Rolling Stones."  The Boston Globe wrote "Boston's Splendid Nobodies is a humble crew - in everything, that is, but musicianship, while their musical universe merges blues rock, traditional country, and rockabilly." The four piece band's follow up records have been noted for everything from “heartfelt songs with lyric inventiveness to boogie-woogie of classic dimensions.
https://splendidnobodies.com/

Johnny Bickford has been a singer/songwriter in the Boston area for three decades.  Partnering with drummer, Pete Woodward and guitarist Jerry O’Hare, both from the band Capital 6, and joined by local folk singer/songwriter, Katie Frassinelli; this new line-up brings a freshness to some of the many songs Johnny has written over the years.  Johnny and Pete are currently producing Katie’s latest album, with Jerry as the hired gun on guitar.  Jerry can also be seen/heard shredding his licks in the band, The Bamboo Steamers. Johnny Bickford hopes to have his second solo album out by summers end, entitled No Longer a Wanderer.
https://www.facebook.com/johnny.bickford.5