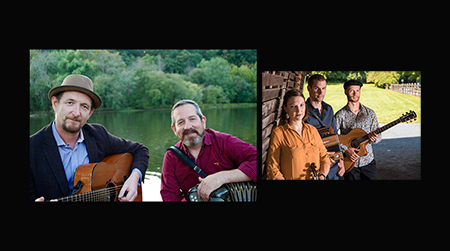 John Doyle and Mick McAuley - Longtime musical partners and collaborators, John Doyle and Mick McAuley, draw on their many years in the groundbreaking group, Solas, in bringing an evening of top-drawer Irish music to audiences worldwide.  Widely considered  the finest Irish guitarist performing today, John Doyle has toured or recorded with a veritable who’s who in Irish, British Isles and folk music including Joan Baez, the Transatlantic Sessions, Usher’s Island (Andy Irvine, Donal Lunny, Paddy Glackin, Mike McGoldrick and John); McGoldrick, McCusker and Doyle; The Alt; Linda Thompson, Kate Rusby and a list of dozens of others.  Mick McAuley’s powerhouse technique on accordion makes him one of the most in-demand studio musicians in Irish music. His subtle whistle-playing and emotive singing adds additional depth, so much so, that he was tapped by Sting for a lengthy run of “The Last Ship”.  These two together again are truly not to be missed.
www.johndoylemusic.com


Poor Man's Gambit was formed in 2015 and hails from Philadelphia, Pennsylvania, USA. This trio has released 3 albums, completed two international tours, and has been noted as an increasingly popular Irish-American group.

Featuring Corey Purcell (button accordion, cittern, bodhran, vocals, and dance), Deirdre Lockman (fiddle, vocals), and Federico Betti (guitar, fiddle), PMG brings together three diverse musical backgrounds which complement the other’s musical styles both on stage and in the studio. With two multi-instrumtalists in the line-up, PMG has been noted for their ability to change instrumentation many times over the space of a performance, and offer several levels of musical depth to listening ears. The addition of Corey’s flashy footwork on the occasional reel adds an extra punch of energy to their shows.

The trio’s latest album ‘Land of Sunshine’ showcases a carefully selected offering of spirited tunes balanced with an equal number of expressively performed songs. Most of the repertoire is rooted in Irish traditions, but some pulls from other provincial influences including England, Brittany, and Scotland, in addition to several original compositions also included in the collection.
www.poormansgambit.com