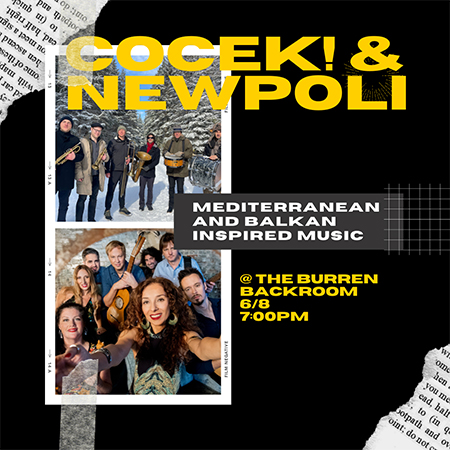 Cocek! Brass Band  - Half serious as a heart attack and half hilarious with enough singular clevernesses to provoke a college course in the study of them” - Mark Tucker, FAME Cocek! Brass Band performs original compositions inspired by music of the Balkans, New Orleans and other brass bands from around the world.  They're performed at International music festivals, college concert halls, performance art spaces and clubs across the country and always bring a good time.
https://www.cocekbrassband.com


Newpoli  - Called “…a brilliant outfit,…who grab southern Italian traditional music by the neck and recast it in a dramatic style” by Songlines (UK), Newpoli is a unique group with a powerful sound and a 21st century take on their tradition that is beyond comparison.

With exciting interpretations of traditional and originals that draw deeply from one of the world’s lesser known music traditions, Newpoli is Italy’s next inspiring interpreter of southern Italy’s taranta tradition.

The group is fronted by singers Carmen Marsico and Angela Rossi, a pair that PopMatters called “…, visual and musical cynosures with their contrasting looks and twining vocal lines.”

In concert you’ll hear the tamburello, played by virtuoso Fabio Pirozzolo, pounding out the heartbeat of Newpoli’s music, the two female singers will start up a wild, frenetic dance and you'll have a very hard time sitting still! The tempo is high, and the drama and passion can be heard in every note!
https://www.newpolimusic.com