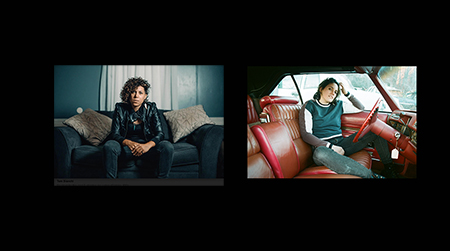 Kristen Ford is a singer-songwriter, and multi-instrumentalist based in Nashville, TN. Her live looping show layers beatboxing, harmonies, guitar, and drums and has wowed audiences from Boston to Berlin, rawkus Pride Festivals to pin-drop listening rooms.

After years of relentless touring and over 1500 shows, March 2020 brought an abrupt end to the party. That summer she recorded "No Plans EP" produced by Rachael Moore (Robert Plant, Allison Kraus, Martina McBride). Invited to create songs for the derby horror film "Valentine Crush". Speaking lines, skating stunts and doing two music videos for the film, Ford decided becoming an actor was her next big adventure. She has since provided music for film and tv soundtracks and frequents Atlanta for screen roles. Her 5th full-length record "War in the Living Room"  was produced by her mentor June Millington and Brett Bullion (Now, Now, Lizzo) and made possible by a $20,000 crowdfunding campaign. Her first LP pressed to vinyl, it was released on 11/11/21 and has received airplay on WNXP, Lightning 100, been critics pic of the week (indie shark) single "Broke Stoned & 23" premiered on Telegram.com
https://kristenfordmusic.com


Carissa Johnson, a Boston native, is known for her straight-forward lyrics, driving melodies, and her band’s inimitable live energy. From the beginning, Johnson has been supported sonically by hard-grooving drums and resonant guitar melodies. The singer and her band won Boston's legendary Rock and Roll Rumble (previous winners include 'Til Tuesday and The Dresden Dolls) in 2017 and took home ‘New Act of the Year’ at Boston’s 30th Annual Music Awards. Johnson has toured the country extensively as a solo artist with an acoustic guitar, and at times accompanied by her band, She has opened up for national acts such as Toth, TORRES, Sarah Jaffe, Dorothy, Thunderpussy, Damone, & The Damnwells. Johnson is currently promoting her latest full-length release “Blue Hour” (November, 2021).
https://carissajohnsonmusic.com