Side Street, The Lied To’s 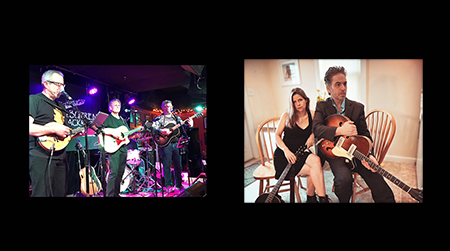 Side Street is an indie folk/rock trio based in the Boston area. Side Street is noted for original compositions and tight vocal harmonies as well as innovative cover song interpretations.

The Side Street sound is a mixture of myriad influences each member brings to the stage and recording studio. Bob Littman (Mandolin/Fiddle/harmonica/Vocals), Eric Luskin (Guitar/Mandolin/Bass/Vocals) and George Pultz (Guitar/Vocals) create a fun, vibrant, and dynamic combo. Their songs are about "life themes" as well as fun, whimsical and off kilter slices of humanity.

Side Street has performed selectively in the greater Boston area including two previous appearances at The Burren.  and has been featured on 90.5 FM WICN on The Folk Revival with Nick Noble and on Spirit Words with Anne Sweeney (www.spiritwords.org).

Side Street will be premiering their third and latest CD called “Between the Sidewalk and the Shadows” at the Burren on Friday evening June 3, 2022.  The new CD adds an edgy element to their repertoire.


The Lied To’s - Like their first two releases, The Lied To’s, (Susan Levine and Doug Kwartler), third album, The Worst Kind of New, explores the challenges of relationships with the duo’s trademark grit, honesty and harmony, but this time they also dig deep into the next stage of life, examining loss, grief, memory, and the desire for love and self-acceptance. Folk Radio UK writes, "In digging into the emotions that bedrock the experiences captured in the songs, the worst kind of new is the best kind of hurt."  Levine and Kwartler were solo singer-songwriters when they first met and formed The Lied To’s in 2013. Three albums and nine years later, the pair, who took their name from The Everly Brothers’ “When Will I Be Loved,” continues to share music and life. Between them, they have been finalists at the Kerrville Folk Festival, Falcon Ridge Folk Festival, the Rocky Mountain Folks Fest, and the International Songwriting Competition, among others, and have had songs on national television programs.  Kwartler is also a respected music producer who owns and runs Hollow Body Recording Studios in Chelmsford, MA.
http://www.liedtomusic.com