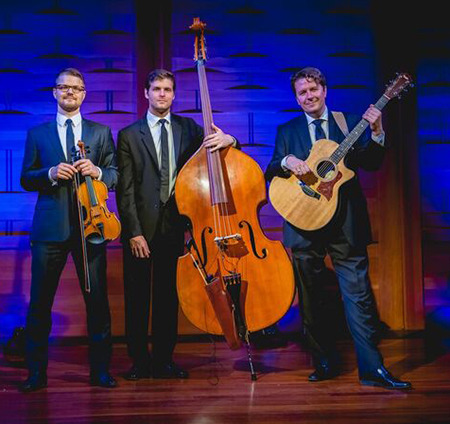 “Just like our New England weather, if you wait a minute the International String Trio will change it up. This local eclectic acoustic ensemble handles styles ranging from gipsy jazz to Appalachian folk, classical arrangements and songs from movie soundtracks.”
- The Boston Globe, MA

The group was founded in 1999 by its musical director and guitarist, Slava Tolstoy. During the last 17 years the group has performed at more than 1000 venues across the USA and has gained national recognition for its distinct sound and stylistic diversity. The trio’s repertoire includes classical, jazz, popular and world music (Italian, French, Russian, Jewish, Spanish, Latin American, Gipsy and Irish).
The International String Trio has developed a unique concert program that is both highly entertaining and educational, energetic and musically gratifying. The group plays up to 150 gigs a year at venues including: concert halls, jazz clubs, universities, schools and private homes. At our performances we enjoy leading our audiences on a cultural musical journey, as we perform music from countries around the world.

Slava Tolstoy - Guitar, Musical Director
Slava's background includes studies of Composition and guitar performance at St.-Petersburg Jazz Conservatory, Russia. He received his Bachelor Degree in Contemporary Writing and Production from Boston's renowned Berklee College of Music, where he was a scholarship student. He founded the "International String Trio" in 1999 and developed a unique performance concept for the ensemble. In addition to being an accomplished performer he is also a songwriter and producer with several credits under his belt.

Jakub Trasak - violin
Jakub Trasak is an accomplished and versatile violinist and producer from Prague, Czech Republic. Having earned a violin and vocal diploma at the Prague Conservatory of Jaroslav Jezek, he released three solo CDs and performed across Europe, besides attending various violin conferences in the United States. By the age 7 he was touring all over Europe playing up to 150 shows a year at some of the most prestigious concert halls. He later joined Berklee College of Music on scholarship where he participated in the college’s finest events, including a performance with American composer Mark O’Connor who presented his Double Violin Concerto for which Mr Trasak wrote an opening cadenza.

Max Ridley - bass
Max is a Boston-based musician, composer and bass teacher. He has been fortunate enough to have shared the stage with renown jazz musicians, Kenny Werner, Ingrid Jensen, George Garzone and Perico Sambeat. He has played in venues such as the Regatta Bar, Sculler's Jazz Club, the Blue Note, Dizzy's Club Coca Cola at Lincoln Center, the Umbria Jazz Festival, and the John F. Kennedy Center for the Performing Arts. After graduating high school he was awarded a full-tuition scholarship to study at Berklee College of Music. He has also spent some time living in Valencia, Spain and considers it his second home as well as the other musical community to which he belongs. He currently is earning his master's degree the Berklee Global Jazz Institute and is a part of several local groups as a sideman, leader or co-leader. He performs and tours domestically and internationally.