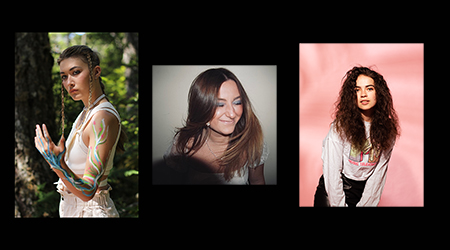 Kaylee Federmann - A storyteller at heart, and a singer-songwriter by trade, when Kaylee was just 10 years old she found her father’s old guitar in their basement. Two short years later her father would tragically pass away from cancer, and that Kaylee – coping with his loss – would begin to teach herself using his old guitar books. Fast forward a few years of voice lessons, open mics and trips to Nashville -  Kaylee posted a demo on TikTok which accumulated over half a million views. Due to the overwhelming response, Kaylee released “Her Song” in February 2021 and has garnered over 900k streams on Spotify. Kaylee’s follow up single titled “Anything Can Happen” garnered traction on TikTok and Spotify as well. Kaylee has been writing, producing, and recording new material. The new music led her to securing a nomination for Pop Artist of the Year and New Artist of the Year at the Boston Music Awards as well as a nomination for Pop Act of the Year at The 2021 New England Music Awards where she worked with notable producers including Bleu (Demi Lovato, Michelle Branch) and Steven Martinez. When Kaylee is not in the studio writing and producing, she is playing shows. Kaylee had the opportunity to open for Ally Brooke of Fifth Harmony and former American Idol alum, Crystal Bowersox. She loves finding ways to connect with her fans especially at live shows. “One of the most amazing things anyone can feel is heard and listened to, I want to make my listeners feel exactly that when they come to my shows. As if we’re just having a conversation” Kaylee explains.Whether she’s writing her own songs, working with other artists, toplining, or performing – at the end of the day Kaylee is in the business of telling stories. What story will she tell next? Stick around to find out.
https://www.kayleefedermann.com/

Ava Panza is a 20 year old vocalist from New Jersey studying at Berklee College of Music. Some of her inspirations include Paramore, Lizzy McAlpine, Fleetwood Mac, and Big Thief.

Her debut single "Alive" released November 20th 2020 on all streaming platforms as well as her newest single “background” that released February 19th, 2022.
www.avapanza.com