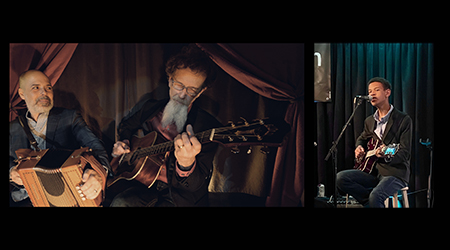 With music and actual stories, The Swampalachian Trail is a tribute to the many unheralded folks who did the heavy lifting to create the infrastructure for the country as we know it today. In this non-religious, non-political, but historical show, we present slave spirituals, work songs and the blues and jazz to which both gave birth, along side hymns and the Appalachian reels and hollers that poor European-American homesteaders contributed. We tie all these forms together with contemporary music inspired by the aforementioned. Walter also includes some originals and a few Richie Havens classics to mark his 10 years with the Woodstock legend.

In 2020 The American Folklife Collection of The Library of Congress featured and archived Parks’ research work on the music of Southeast Georgia’s Okefenokee Swamp. For this new project with Curto, Parks has modernized the hollers, shaped-note hymns and banjo porch songs performed by the swamp homesteaders. Parks was a founding member of the popular cello/guitar folk duo called The Nudes.

Since relocating to Philadelphia from New York, Curto has been passionately pursuing the Irish button box which has become a defining aspect of Parks and Curto’s swampalachian sound. Curto was a founding member of the "Brazilian Bluegrass" band Matuto, which gained a following across the US, Canada and Europe and more recently he led the accordion-centric American-roots band Fish Harmonics. Curto also currently studies under the tutelage of Irish button accordionist Billy McComiskey.

In their live show Parks and Curto frequently use back-stories to preface songs – be they historic or original compositions or the occasional tributes to Richie Havens.
www.walterparks.com
www.robcurto.com

Andrew Sue Wing is a fourteen year-old singer/songwriter and guitarist. He started playing music at age 2 and quickly progressed, taking up electric guitar and drums. Equipped with a strong baritone voice and a unique style of rhythm and lead guitar, he’s able to belt out strong choruses and deliver soulful ballads. His repertoire includes both originals and covers of classics. With influences such as Stevie Wonder, Sam Cooke, John Scofield, and Christian McBride, his originals combine rock, blues, funk, and soul.
https://instagram.com/awsw_music