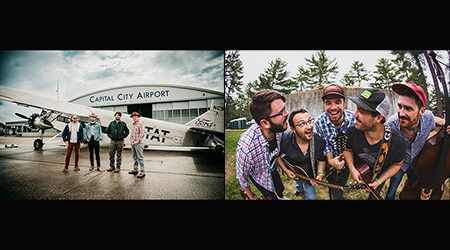 The Wooks - An award-winning bluegrass band inspired by the traditional as well as the unconventional, The Wooks have established a distinctive sound through original songwriting, exceptional musicianship, and outside influences ranging from jam bands to Southern rock. Their exhilarating third album, Flyin’ High, offers a refreshed lineup of the group, even though its members have been crossing paths with each other at music festivals for years.

“I'm proud of the quality of words, especially from the guys in the band, because they didn't really share their songs with me until we started working on this album,” says CJ Cain, one of the band’s founders. “Everybody goes through that process where they start writing songs and then they take the leap of like playing them for someone else. I love the songs that I wrote on it, but I'm very pleased with their level of writing, too, particularly because they're younger than me. It’s pretty inspiring to see.”
https://wookoutamerica.com/

Grain Thief is a 5-piece string band from Boston MA. The group comprises Patrick Mulroy (guitar, vocals), Zach Meyer (mandolin, vocals), Michael Harmon (bass, vocals), Tom Farrell (lead guitar), and Alex Barstow (fiddle). Formed in 2015, the group released their debut EP Animal, which showcases their roots in folk, bluegrass, and old time music. The group spent their formative years playing shows and residencies around New England before heading back into the studio to record their first full-length release, Stardust Lodge, in 2018. This album was a departure from Animal’s bleak simplicity; experimenting with additional instrumentation within the group and a more developed songwriting, arrangement, and production style. The band spent much of 2018 and 2019 touring the material in the Northeast, Southwest, and Southeastern United States, with performances at music festivals like Grey Fox Bluegrass Festival and Ossipee Valley Music Festival and opening for artists like Tim O’Brien, Mile Twelve, and Town Mountain. The record saw success on radio stations nationwide charting weeks in nationally-reporting music charts. In August 2020, the band released Gasoline, their latest full length. The new material, recorded mostly live-in-the-studio around a few microphones, shows the band returning to their true live sound as a roots string band.
http://grainthief.com