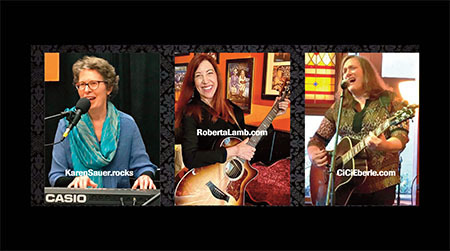 CiCi Eberle is a veteran, ever-evolving, performing songwriter, covering a range of musical styles, with influences drawn from folk, acoustic rock and blues. Performing her original music around Boston for the last several years, CiCi has come into her own after transplanting from Colorado, where she played with the folk-rock group Cynova. CiCi delivers her relatable compositions with an engaging, personable style that is always good for some laughs. She mines simple, every-day topics to create honest, quirky, off-beat songs that span the full range of emotions. CiCi is an accomplished guitar player, effortlessly integrating her rhythmic, finger picked stylings as another voice in her story telling. From CiCi’s perspective as a trans woman, she is active in social causes and this is frequently reflected in her lyrics.
http://www.cicieberlemusic.com


Roberta Lamb - Roberta’s songs range from witty and clever with a groove to impassioned ballads that touch close to the bone. No matter the song, she brings it straight to the heart with her clear, strong voice and her magnetic stage presence. Her fans describe her music as sophisticated, clever, honest, sometimes bittersweet - and always beautifully performed.

A singer songwriter with unique influences, Roberta Lamb draws on her classical vocal training, her love of blues and pop, and her appreciation for a timeless tune to entertain at a variety of venues. A native Texan, she’s based out of Rhode Island, and she can be found performing gigs at cafes, folk festivals, farmers markets and wherever artists share their voices across the US and now, since Covid-19, in Israel, the UK and Germany, so far.

Roberta’s music, including her album, Not Your Mama’s Blues, is streamed on Spotify, Apple Music, Amazon Music and available for purchase at Bandcamp.com.
http://www.robertalamb.com

Karen Sauer grew up in Redwood CIty, California.  The San Francisco peninsula was a heavenly place to live in the pre-Silicon Valley days.  Yes, she rode her homemade skateboard to school.  She thinks she can probably still ride one, but is hesitant to put it to the test.

Moved East in 1975.  After graduate school, Karen was lucky to be hired as a collaborative pianist at Wellesley College.  When she retired, a friend talked her into taking a free on-line songwriting class.  What fun!  She writes mostly political rants and love songs, so there’s no shortage of topics. Karen never thought that she would sing in public, but she soon realized that if her songs were to be heard, she would have to sing them herself.  She enjoys making videos for her songs and occasionally for others.  They can be found at karensauer.rocks.

Doors are at 2:30pm. Showtime is 3pm. Dinner and drinks available at all tables.