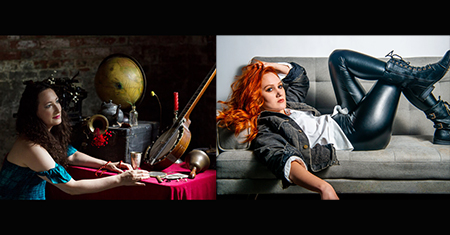 Grace Pettis is the winner of many of the nation’s most prestigious songwriting contests, including NPR’s Mountain Stage New Song Contest, and has received grants from the Buddy Holly Educational Foundation.  Grace’s songs have been recorded by other esteemed artists, including Sara Hickman and Ruthie Foster. Her highly acclaimed independently released records, Grace Pettis (2009), Two Birds (2012), and the acoustic EP, Blue Star in a Red Sky (2018), have garnered praise from top-notch magazines, newspapers, and radio. She also holds down duties as a member (along with Rebecca Loebe and BettySoo) of the Americana/folk-pop trio Nobody’s Girl.
https://www.gracepettis.com/


Rachael Sage - Poetica - Poetica is an adventurous fusion of poetry with jazz, classical and Americana musical elements in the vein of Leonard Cohen and Laurie Anderson. The self-titled debut album was conceived, produced and engineered by 6-time Independent Music Award winner Rachael Sage, with musicians contributing from around the globe. Poetica aims to create connection and shared experience via the unifying power of language.

Rachael Sage is a soulful vocalist, innovative multi-instrumentalist and award-winning singer/songwriter and producer from NYC who has earned a loyal international following for her dynamic piano playing, delicate guitar work, and improvisational audience interaction. She has toured with an eclectic list of artists including Howard Jones, Beth Hart, Ani DiFranco, and Grammy® winners Shawn Colvin and Judy Collins. For more information, visit poeticaproject.com.

"The Carole King of her generation..." - Blurt Magazine
"Theatrical, expressive and blessed with perfect comedic timing, Sage is the kind of performer you can’t take your eyes off.” - Stereo Embers
"Sage impressively wrote a song that can make you sad as well as make you grateful — while feeling empowered to do anything." - American Songwriter
http://rachaelsage.com