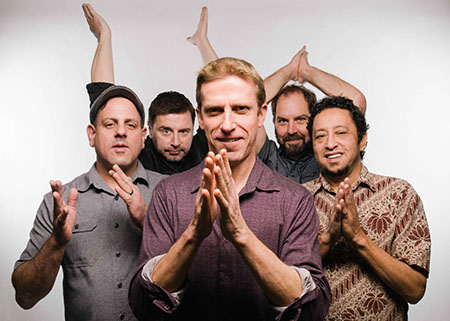 Club d'Elf has been helping audiences lose track of time beginning
with the band's first show twenty three years ago at The Lizard
Lounge, and ever since then has taken it's bold synthesis of Moroccan
traditional music and electronic, dubbed-out funk to audiences as far
away as Japan and South America. Circling about bassist/composer Mike
Rivard and drummer Dean Johnston, each Club d'Elf performance features
a different line-up, drawn from a constellation of some of the most
creative improvisers from the jazz, DJ, rock & world music scenes of
Boston and NYC. The band's music has been called "the music of dreams"
by the Boston Globe, and draws from a startlingly wide spectrum of
styles, including jazz, Moroccan Gnawa, hip hop, psychedelia,
electronica, avant garde and dub.

“The roaring avant-funk of electric-era Miles (and) the legato drift
of the Grateful Dead…heady music that doesn’t neglect the tail”. -
Time Out New York

“Crushed between the borders of Morocco, jam band land and the
kingdom of avant-garde jazz lies Club d’Elf…James Brown-meets-Sun-Ra.”
- The Boston Herald