Lisa Bastoni and Danielle Miraglia on the Burren Back Patio 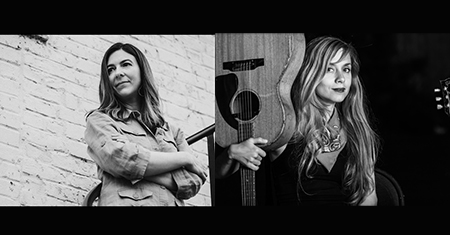 Lisa Bastoni and Danielle Miraglia reconnect for their first show together in over a year, both with new albums!

Lisa Bastoni is a 2019 and 2020 Boston Music Award nominee (Folk) , and winner of the 2019 Kerrville New Folk Contest. "Americana of the highest order...along the lines of Gretchen Peters or Patty Griffin." (Maverick-UK). She lives in Northampton, MA.

Backyard Birds is the latest offering from Massachusetts singer-songwriter Lisa Bastoni. The title of this 7-song collection comes from a line in “Sorrow’s a String,” inspired by a visit to an old family home: “A new radio tower has gone up in the distance, but the backyard birds still whistle your song”

Backyard Birds was produced by award-winning songwriter/producer/multi- instrumentalist Sean Staples, who also produced Lisa Bastoni’s How We Want to Live (2019). With guest performances by Mark Erelli, Rose Cousins, and Lula Wiles, the album reached #1 in Contemporary Folk in Roots Music Report in Jan. 2020, and led to a number of other achievements — Lisa was a 2019 Kerrville New Folk Winner, and was nominated for Boston Music Awards (Folk) in both 2019 and 2020.
lisabastoni.com


Danielle Miraglia comes armed with a strong steady thumb on an old Gibson and an infectious stomp-box rhythm with tunes ranging from heart-felt to socially conscious that will move both your heart and hips. Her latest “Bright Shining Stars” debuted at #15 on the Billboard Blues Charts.
Cascade Blues Association calls it "... tough as rawhide, but smooth as blended whiskey."  Released Oct 2020 with Vizztone Label Group, it's a solo acoustic folk/blues record that highlights the one-woman-band live sound she’s honed over the years, featuring guest appearances by talented friends Laurence Scudder, Peter Parcek and Richard "Rosy" Rosenblatt. It includes originals as well as a collection of songs she covers at live shows, paying homage to influences like Big Bill Broonzy, Bob Dylan, Janis Joplin and more, plus the title track "Bright Shining Stars," written by her husband, Tom Bianchi.

"Americana and blues practitioner Danielle Miraglia wisely avoids fuss and clutter on her latest album, Bright Shining Stars. Fingerpicking and strumming on acoustic guitar are central to her sound, with percussion frequently provided by the infectious stomp of her foot. Three of the 11 tracks here are solo recordings, reinforcing a truism that the artist frequently has proven on Boston-area stages: A charming voice and fluid guitar prowess are all an artist needs to keep a listener rapt." - Bobby Reed, Downbeat Magazine
daniellem.com