Celebrating The Animals In Our Lives 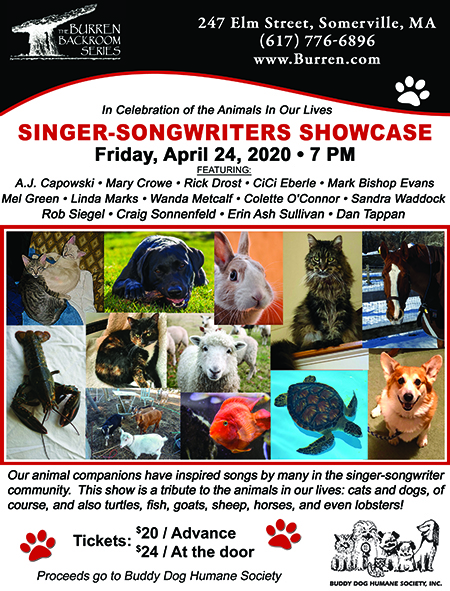 Our animal companions have inspired songs by many in the Boston singer-songwriter community.  This show is a tribute to the animals in our live, cats and dogs, of course, and also turtles, fish, goats, sheep, horses and even lobsters!  Performing will be AJ Capowski, Mary Crowe, Rick Drost, CiCi Eberle, Mark Bishop Evans, Mel Green, Linda Marks, Wanda Metcalf, Colette O'Connor, Sandra Waddock, Rob Siegel, Craig Sonnenfeld, Erin Ash Sullivan and Dan Tappan. The performers will be donating their proceeds to Buddy Dog Humane Society.

A.J. Capowski is a singer/songwriter from Chelmsford, Massachusetts.  He started out writing and performing in rock bands in Southern NH, but got out of music for a number of years to raise a family.  Recently he has returned to writing and performing with a new focus on solo acoustic music.  He is a regular at open mics around the Merrimack Valley.


Mary Crowe is a classically trained singer/songwriter who is equally at home in jazz, blues, and cabaret. Mary’s theater background adds flavor to the cover songs she interprets so well, and flair to her cleverly crafted originals.   Her CD “Rebound” shines, with humor and honesty, on some life experiences she shares, in song. She is proud to be part of the Women in Music Gathering. www.marycrowesings.com

Cambridge-based Rick Drost  writes and sings songs with depth and heart, songs that repay repeated listening and convey a long love of classical music, natural wonders, poetry. He sings with a storytelling style likened to Tom Rush and John Sebastian.  Now retired as an engineer, he loves to travel around the country singing small festivals, house concerts, and open mics. www.rickdrostsongs.com


CiCi Eberle came onto the Boston singer/songwriter scene six years ago after relocating from Colorado. Using her unique rhythmic, fingerpicking style of guitar and her strong voice CiCi delivers original songs steeped in the subtle humor of everyday existence. Color of Sunlight is CiCi’s first CD with another  in 2019.
https://www.reverbnation.com/cicieberle


Mark Bishop Evans grew up in southern California where his major musical influences outside of church were Gordon Lightfoot, Bob Dylan, Peter, Paul and Mary, Paul Simon, the Beach Boys and pretty much any folk, folk rock or beach music. Listening and playing the folk and protest music of the 60's inspired him to begin writing his own songs. Mark has a way with words and melodies, bringing them together in pleasant and poignant combinations that make you want to tap your feet and sing along, a unique blend of folk, folk rock and ballads, lyrically rich in emotional content and melodically comfortable like a favorite jacket.  He released "Something' 'Bout Tomorrow" in 2019. Mark relocated north of Boston, Massachusetts in the early 90's and today considers himself and "Noreasta".
www.markbishopevans.net


Mel Green is a Boston-based Singer/Songwriter who grew up in Johannesburg, South Africa. He began making music when the Beatles and the 60s Folk Revival coincided.  In the mid-60s he and Mel Miller formed Mel & Mel, and had a regular evening at The Troubadour. They went professional in 1965 and soon recruited Julian Laxton to form Mel, Mel & Julian, which soon became possibly one of South Africa's leading, if not groundbreaking folk groups.He became involved in the Greater Boston folk scene in the early 70s, putting his guitar away as family responsibilities took over, but later took it up again. He wrote and played over the years and has become an enthusiastic singer-songwriter.
www.melgreensings.com


Singer/songwriter/arranger Linda Marks integrates jazz, contemporary folk and pop, with a freedom that impresses the ear and soothes the soul. Her music has been featured in the Boston Globe, Boston Magazine and on National Public Radio. Linda’s Moments album, named #1 album of 2018 on the Big Jazz Umbrella, released to a sold out show at Club Passim. Her 7th album, In Grace, was released with a 9 piece "orchestra" at The Burren in October 2019.  Linda has two albums dues out in 2020: The Piano and Songs At the Heart Of Life.  Linda writes many songs about the animals in her life and performs regularly at benefits for animal organizations.
www.lindamarksmusic.com

Wanda Metcalf has been writing songs for about 13 years and doing open mics for almost that long. Many of her songs are about animals and a number are protest songs. She is currently recording a 2nd CD and beginning work on a project “Jeffrey Epstein: The Musical.”

Colette O'Connor is a Cambridge-based singer, storyteller, and skilled acoustic guitarist “…like re-discovering the hey-day of classic singer-songwriter.” – Pulse Magazine, CD of the Year. Her voice has a rich Joni Mitchell quality and the strength of Melissa Etheridge. O'Connor's music is a refreshing surprise that encourages listeners to relax, while re-charging eye-twinkles with an adventurous sense of fun. She is co-founder of Women In Music Gathering with Linda Marks and Cindy D'Adamo.
www.coletteoconnor.net


Rob Siegel is well-known in Boston folk music circles as an innovative songwriter who draws from his idyllic yet stressed-out middle-class suburban existence and produces memorable, intelligent, well-crafted songs. Rob has opened for Bill Staines, Vance Gilbert, Jack Hardy, Geoff Muldaur, and others. Rob likes to write memorable songs, and positions himself between Robin Williams and William Faulkner.
www.robsiegel.com


Craig Sonnenfeld is a Boston based singer-songwriter-guitarist who has performed at many venues in the Northeast. His songs are regularly featured on the Down Jersey Jim show on WSNJ in southern New Jersey.  Craig studied finger-style guitar in his youth with blues legend Philadelphia Jerry Ricks.   He has also studied with acoustic-blues guitar master Paul Rishell.   The influence of classic country, folk, and acoustic blues can be heard in Craig's original songs, and he often covers classics of those genres.
www.craigsonnenfeld.net


Erin Ash Sullivan co-founded the band Edith O in the late 1990s with singer-songwriter Amy Speace, performed regularly at the Bitter End and CBGB’s Gallery, and released an album, Tattooed Queen, which garnered critical raves. After many years as a teacher, administrator, author, and curriculum developer, she has returned to writing and performing and can be found on the metro Boston open mic circuit.

Dan Tappan writes vivid, lyrical songs steeped from snippets of life, seasoned with dashes of humor and whimsy, a dusting of philosophy, and an occasional pinch of pathos. After many years as a software engineer, Dan tired of working for corporations and decided to look for other outlets for creativity. With a lifelong love of folk music, he decided to get serious about playing and started participating in the local open mike scene. Eventually Dan discovered that crafting lyrics and melodies tickled the same creative brain as designing software and he began writing his own songs.
www.dantappanmusic.com

Sandra Waddock is a singer-songwriter who favors country-flavored folk tunes. She can frequently be found at open mikes around Boston and plays in the band Broken Fingers with Ed Loechler and Jeffrey Benson.