The Dogmatics, Stop Calling Me Frank, The Billy Connors Project 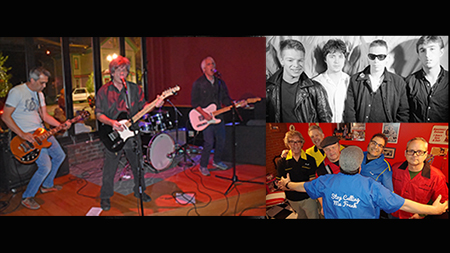 The Dogmatics - Peter, Paul and Jerry met each other in the 1st grade at St. Matthew’s in Dorchester. They would endure 8 years of discipline together. Crazy, violent times forced many family’s out of Dorchester..The twins moved to Kingston and Jerry to Weymouth. They kept in touch during their high school years and couldn’t wait to get out of the suburbs and back into the city. Paul started a band with lifelong friend T.K, singer Skag, guitarist Sam Babbitt, and drummer Joey Olsen …they called themselves the Savage Beasties, a rocking band and the toast of the South Shore. This band would be the starting point for all of their future bands, T.K , and Paul moved to a loft at 8 Thayer st. in Boston. T.K co-founded “Spearhead Go” along with the gifted Barry Hall, B.C Kagan and Joey Olsen. Spearhead Go started playing out and recording, and they were the template that Paul would follow.
http://thedogmatics.com/

Stop Calling Me Frank - Direct from Boston, from the heyday of revered and legendary punk rock club The Rat, we bring you a CD 30 years in the making for fans of The Lyres, Barrence Whitfield, Scruffy The Cat. The Del Fuegos, Nervous Eaters, and The Real Kids.

Stop Calling Me Frank, a Boston’s band’s band, returns to the scene from the days of the Rat in Kenmore Square with their first taste of brand new music in almost 30 years. The same five guys (with a sixth added) are still having a blast playing their classic fan-favorites and all kindsa newshit! Their addictive, high energy brand of garage, soul, & punk-infused rock n' roll never sounded better.

Born and raised on Stax, Motown, and Ramones. Contemporaries of some of Boston’s best bands ever, like the Mighty Mighty Bosstones, the Real Kids, the Dogmatics, and Unnatural Axe.
https://www.facebook.com/rockSCMF/

The Billy Connors Project  - Four guys with a little bit of experience in the Boston Rock Scene that still love to perform and write new material. The Billy Connors Project are
Billy Connors, Adam Sherman, Ray Fernandes, Jamie Griffith. We are made up of veterans or some of Bostons most well known bands including Private Lightning, the Atlantics, The Dirty Truckers , The Boize and Third Rail.
thebillyconnorsproject.bandcamp.com