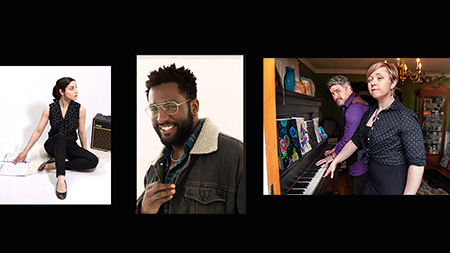 Chris Walton is a Singer/Songwriter/Producer. His music is a cool blend of classic Soul and R&B with a modern aesthetic. Chris is equally comfortable writing an intimate introspective love song or an upbeat pop banger. His EP Bsides (released in 2018) is available on all streaming platforms, and is a collection of some of his favorite songs written while attending Berklee. He is currently working on his first Album to be released in 2020. His first single Sober is available on all digital platforms.
www.instagram.com/senatorfudge

Three At Home - Songwriters Dann Russo & Mary Casiello have been writing and playing music for over ten years each and in 2017 decided to combine their forces. Their harmony-driven pop-rock incorporates intelligent and honest lyrics, chord progressions both familiar and new, and a pervasive energy and fun that is infectious in their live performances. Their EP Perfectly Unclear, released in June of 2018, runs deep into the rock and roll territory of bands like The Black Keys, while still maintaining a focus on the tight harmonies that they are known for in their acoustic performances.

Three At Home are 2019 New England Music Award Nominees for Best in State in Massachusetts, and are currently working on a full-length album, slated for release in 2020.

"If you've never heard of Three At Home, picture if you packed Mumford & Sons into a nuclear bomb." -- Tim Howd, The Only Humans
www.threeathomeband.com


Savoir Faire is the musical project of Boston based singer/songwriter and guitarist Sarah Fard. Trained in jazz guitar but inspired by rock and roll, Savoir Faire fuses genres in what has been described as " A sort of rock- and ’60s-lounge-inflected jazz" (Victor Infante). With a unique vibrato, often paired with a warm guitar tone, her  vocals can recall the crooners of decades past. However, Savoir Faire employs just as much nostalgia as she does relevancy: contemplative, occasionally biting, lyrics and edgy guitar riffs remind listeners that she has no time for love songs in her own writing.  Her December 2018 album, Machine with a Memoir, tackled issues of sexism, education, and humanity in an age of technology. On January 1, 2020, Savoir Faire released the single "Creature of Habit." The song, originally an entry for the Acoustic Guitar Project in 2018, was produced in collaboration with BearTone Studios.
www.SavoirFaireMusic.com