"Let's Do Lunch" A Brand New Nashville Style, “In The Round” Songwriter Series 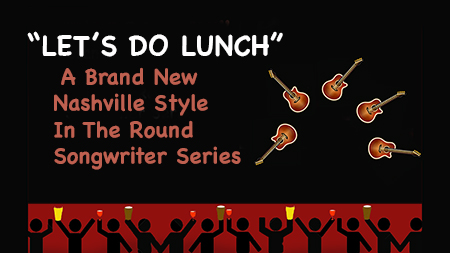 "Let's Do Lunch" A Brand New Nashville Style, “In The Round” Songwriter Series

Ken Zimmerman has been entertaining audiences in the US and abroad with his piano playing and songwriting for over 30 years. Ken has been a part of a number of popular local bands including The Lodge, The Fuzz Brothers, and The Hardy Boys. More recently, Ken played the Mixed Tape 1984 show, Beatles Brunches, and continues to write and record original music — as well as often returning to his piano bar roots by playing sets of great cover songs at a music room near you.
https://www.facebook.com/The-Lodge-131910020214851/


Dave Charles - Long time fans of the Boston rock scene may remember seeing “The Next” spray-painted on walls and bridges from Kenmore Square to Allston, and hearing Sidewalk Gallery on Boston airwaves in the 80’s and 90’s. Both bands featured the distinct harmonies of twin brothers Dave and Brian Charles, who still live and make music here. Dave’s new music echoes the excitement of early Elvis Costello, the sonic impact of Sugar or Dinosaur Jr., and the melodic kick of The Smithereens.
https://www.davecharles.org/


Johnny Bickford has been a singer/songwriter/performer for three decades.  Moving to Boston in the 80’s, he helped form the band 23 Skidoo which evolved into the 90’s band Zen Lunatic (nominated best new local band, Boston Music Awards, 1996). They recorded two albums, Eleven Days in May, and Disco Insurance, at local recording establishment, Zippah Studios.  Since then, Johnny has been crafting songs and performing throughout the greater Boston area. Recently, Johnny was one of the creative forces behind the alt-country band Hayseed Prophets, whose album, Future Looks Bright, explores themes of love and loss in an intimate setting.  Currently Johnny is lead singer/songwriter for the band Capital 6 whose 2006 release; The World was Supposed to Love Us, offers a blend of roots-rock mixed with Byrds harmony sensibilities. In 2017 Johnny released a solo album, Invisible Man.  Bickford still performs with Capital 6, and is currently working on his second solo album.
open.spotify.com/artist/1Ffr4h5lfQ1D1xPj0NoekT?si=VIG64uYbTZGpfC4JjRKkNg

Chuck Williams - For a folk singer, Chuck is never at a loss for words. His lyrics, at times, are rural poetry. Poetry of the forests, roads, farmlands, prairie and if there’s a touch of fantasy – in the hands of Chuck Williams it will work as a folk song.  Chuck has a personable singing style and it's not done to impress but express. He is a formidable traditional singer-songwriter-storyteller who has been around the barn more than once. If an older style folk-roots collection is your forte you won’t go wrong with Chuck. His latest album,  “Stories I’ve Told,” is just that -- folk-roots.
http://chuckwilliamsmusic.com

Ric Allendorf is an acoustic musician, visual artist and arts educator from Massachusetts. Since writing his first song in 2014, he was chosen as a finalist in two national songwriting competitions, the CT Folk Festival auditions, and has opened for Abbie Gardner, Boxcar Lilies, Ray Wylie Hubbard, Archie Fisher and Susan Cattaneo. In 2019, Ric was a feature at the Providence Folk Festival and performed at three Songwriter Tribute nights at historic Club Passim in Cambridge.
https://ricallendorf.com

Lisa Martin - Award winning songwriter, Lisa Martin, is a Western MA native. Her songs are "melodic and catchy." (Mark Erelli) "She has a knack for wringing out all the passion that can possibly fit into a 3-minute song." (Springfield Republican) Bridging the elements of folk, rock, country and blues, Martin's music "has an intense back beat rarely found within the folk genre. All of her live shows are must see performances." (Motif Magazine). "Few of her acoustic cohorts can rock out like she does." (Worcester Phoenix)
www.lisamartinsongs.com

Mike Laureanno hails from Fall River, MA. He is proud of his roots and many of his songs deal with his gritty blue collar hometown and the lives of his family and friends. Dave Palmater, Folk-DJ of WUMB Boston Public Radio, calls Mike Fall River's poet laureate. Mike is a winner of the 2017 Wildflower, TX songwriting contest, the 2016 Woody Guthrie songwriting contest and a 2016 Kerrville New Folk, TX finalist.
http://mikelaureanno.weebly.com/

Rob McHale - The songs of Rob McHale should be taught in school, because they reflect vibrant history, the value of tradition and living social comment ..Tom Franks, Folk Words Magazine, London, England
www.robmchale.com