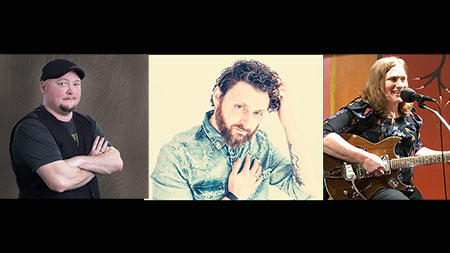 Kerr Griffin is an Americana crooner, DIY musician, transgender man and veteran of the Boston area cover band scene. After developing a chronic allergy to sequins and “Superfreak”, he decided to strike out on his own writing and performing the lyrically-driven acoustic music he’d always loved. Since then he’s been cultivating his own unique brand of acoustic rock that feels new but with roots that are comfortingly familiar.
www.kerrgriffin.com

Jessye DeSilva is a Boston-based singer/songwriter who is passionate about telling human stories through their music. Favoring a sound that lies somewhere between piano-driven alternative rock and country-tinged folk, Jessye's music centers around the idea that it is through the sharing of one's specific experience that listeners will see their own stories reflected back. Jason Scott of indie blog B-Sides and Badlands says, “DeSilva evokes a chest-ripping emotion that hovers inches above the ground, pouring forth the kind of wellspring folk music rarely witnesses.” As a nonbinary queer person growing up in the conservative church, they often felt isolated and different, however it was the vulnerability and resilience of artists such as Joni Mitchell, Tori Amos, and Stevie Nicks that reminded Jessye that they were not alone. The evolution of relationships, societal and religious alienation, the community of chosen family, and the healing of the biological family are among the recurring themes in Jessye's work.
http://jessyedmusic.com

CiCi Eberle is a veteran, ever-evolving, performing songwriter, covering a range of musical styles, with influences drawn from folk, acoustic rock and blues. Performing her original music around Boston for the last five years, CiCi has come into her own after transplanting from Colorado, where she played with the folk-rock group Cynova. CiCi delivers her relatable compositions with an engaging, personable style that is always good for some laughs. She mines simple, every-day topics to create honest, quirky, off-beat songs that span the full range of emotions. CiCi is an accomplished guitar player, effortlessly integrating her rhythmic, finger picked stylings as another voice in her story telling. CiCi’s perspective as a trans woman, CiCi is active in social causes and this is frequently reflected in her lyrics.