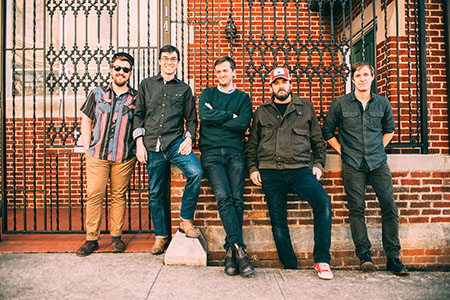 Raw, soulful, and with plenty of swagger, Town Mountain has earned raves for their hard-driving sound, their in-house songwriting and the honky-tonk edge that permeates their exhilarating live performances, whether in a packed club or at a sold-out festival. The hearty base of Town Mountain's music is the first and second generation of bluegrass spiced with country, old school rock ‘n’ roll, and boogie-woogie. It's what else goes into the mix that brings it all to life both on stage and on record and reflects the group's wide-ranging influences – from the Grateful Dead's Jerry Garcia and the ethereal lyrics of Robert Hunter, to the honest, vintage country of Willie, Waylon, and Merle. The Bend Bulletin’s Brian McElhiney says Town Mountain, “has serious country and rock ’n’ roll DNA.” Town Mountain features guitarist and vocalist Robert Greer, banjoist Jesse Langlais, mandolinist Phil Barker, fiddler Bobby Britt, and Zach Smith on bass.

Released October 26th, Town Mountain's latest album New Freedom Blues (2018) is full of new material and features several guest artists including Tyler Childers who co-wrote one of the songs, Miles Miller (Sturgill Simpson, drummer), and other friends. Their prior album, Southern Crescent (April 1, 2016), debuted at #4 on the Billboard Bluegrass Chart while staying for ten weeks on the Americana Music Association's radio chart Top 40, and widely considered one of the best bluegrass albums of that year.

"Call it an evolution or a revolution, but it’s clear that Town Mountain is at the forefront." – Garret K. Woodward, Rolling Stone

"While changing up your sound is always a risk, its one that has paid off for the band, knocking down the artificial walls of tradition that enclosed them and allowing them to go where the music takes them." – Chris Griffy, Concert Hopper

"The best bluegrass band to come along in quite some time... (New Freedom Blues) is the bluesiest bluegrass you’ll likely to ever hear, with some jamgrass leanings... Damn, it’s good." – Amos Perrine, No Depression

"Town Mountain aren’t out to reinvent the wheel, they’re like a new set of the finest tires that gives you a new ride. there’s no fat, no gratuitous notes, no extra stuff, just amazing songs, singing and playing from one of the best bands out there…. or maybe they are the new wheel." -  Buddy Miller

"(New Freedom Blues) is a really strong album made by impressive musicians and produced by Caleb Klauder. You don’t have to hear a lot of the album to know for certain that these guys are experts with their instruments." -  Gary Schwind, Americana Highways

"Town Mountain is known as the purveyors of the swagger-induced, honky tonk side of bluegrass music. They keep their live shows fun and rocking." -  Derek Halsey, Mountain Times

The band’s first full-length record Stardust Lodge was released in August 2018. The arrangements and instrumentation represent a departure from Animal’s bleak simplicity, and the record has met success through streaming platforms online and radio stations nationwide. Since the record’s release, the band has toured in support in the Northeast, Southwest, and Southeast United States.