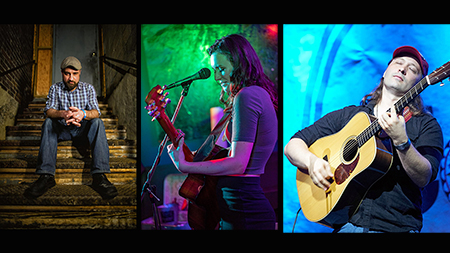 Shawn Taylor - Shawn Taylor’s original ‘wandering roots’ music meanders from Appalachian to island groves, retro rock to sparse folk ballads, heavy travis picking to finger-style time twisters and gut busting soul blues. “His lyrics dabble in a wonderful gritty naturalism that's uncommon around here,” wrote Dan Barry of the New Haven Advocate. His latest original CD “Balance” reflects the breadth of the style he’s developed over the past decade as a fulltime touring performer, and the positive energy that’s kept him going. “Shawn Taylor is one of the finest traveling troubadours performing on the circuit these days. Boasting world-class guitar chops, soul enriched vocals and an uncanny knack for capturing life in a song,” Brian Owens - Metronome Magazine.Along the way he’s won and placed in performing songwriter competitions including the Towne Crier, NY and Infinity Hall, CT, he’s been awarded internationally for his short fiction, played some of America’s finest listening rooms like Nashville’s Blue Bird Café and has shared the stage with notables including Maria Muldaur, Peter Mulvey, Vance Gilbert, and Sarah Potenza. He’s been an oysterman, a cabinet maker, an Appalachian Trail Thru-hiker, has toured nationally with his young family in tow (he’s the father of two) and has devoted the past decade to the relentless pursuit of the wandering roots sound and body of work.
www.ShawnTaylorTunes.com

Gracie Day released her first EP in November of 2017 and quickly won attention for her songwriting, singing and performances, achieving "Best New Act" in 2017 and "Best in State for CT" in 2018 at the New England Music Awards, an organization that acknowledges musical acts throughout all six states. Also, in 2018, Day was a semi-finalist in the international Unsigned Only Songwriting Contest, and nominated in the prestigious Boston Music Awards. Her song "Tennessee,” that gained tens of thousands of plays on Spotify and landed radio placement on Boston FM station 101.7 The Bull. Recorded at the famous Sound Emporium, a legendary studio with a roster of everyone from Johnny Cash, REM, to Alabama Shakes, Gracie Day’s new EP “The Nashville Sessions” was just released in June 2019 . Gracie is currently recording her first length album. www.graciedaymusic.com

Kevin Neidig - Rarely do you get in one musician the virtuosity of singer, instrumentalist and songwriter. Kevin brings all three with eloquent effortlessness. Kevin is a multi-instrumentalist, singer and songwriter with a multi-faceted style all his own, assimilating not only traditional, folk, blues, and country, but also rock and gypsy jazz. Kevin’s songs mix a blend of his own vocal compositions along with as assortment of instrumentals, plus an occasional cover like the iconic blues song “Ain’t No Sunshine,” taking the listener on a dynamic journey with philosophical, thought-provoking, and contemporary lyrics chaperoned by a retro, yet progressive, medley of sound.
www.kevinneidig.com