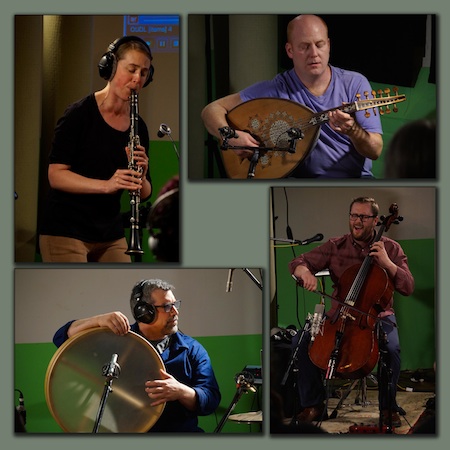 Dunham Shoe Factory is a collaboration between Anna Patton, Mac Ritchey, Todd Roach and Dave Haughey. They are a contemporary acoustic ensemble playing original compositions influenced by world traditions. Combining the clarinet, oud, percussion and cello, their music draws from an array of styles including Egyptian, Jazz, Brazilian, Turkish, Classical and Indian music.

Currently based in New England, individual members have performed in a variety of settings locally, nationally and internationally over the past 25 years. After coming together as Dunham Shoe Factory in 2016, the group has created a unique sound by weaving together the threads of common experience that exist between the players. Two of them hold masters degrees in music performance, two of them have studied traditional Arabic and Turkish music, two of them have performed with the Paul Winter Consort, and all of them have spent time improvising in a variety of settings.

DSF is their attempt to create a new sound that honors the traditions that they have studied and keeps pace with contemporary musical styles. Drawing from their respective backgrounds, each member composes for the group with the aim of creating new work that features improvisation and myriad modern compositional techniques. The result is an ensemble whose concerts are equal parts expressive instrumental mastery, complex compositional style, and a combined perspective on modern classical and improvised music.

In their time together, they have released a live recording, performed in Europe, been selected for a semi-formal showcase at the New England Regional Folk Alliance Convention, performed at Sofar Boston and played in venues in New England, Boston and NYC. They have also collaborated and performed with many international musicians, including Glen Velez, Zohar Fresco, Shane Shanahan, Arezoo Rezvani, Loire Cotler, and Naghmeh Farahmand.