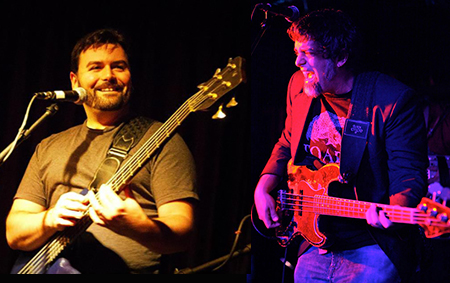 The Singer/Songwriter Solo Bassist is a rare species in the world of music, in fact there’s only a few in the whole country.  It would only make sense that Seth and Tom would find each other musically and work together!  Throughout the years they’ve shared stages in Boston, LA, New York and now it’s time for their triumphant reunion at The Burren!

These bass gents are getting together weekly via the world wide web and working on a show for the ages!  Pile on top of that November 10th is Tom’s birthday making this an event not to be missed!

From 2001 through 2005, Seth Horan lived in vehicles, criss-crossing the USA over twenty-seven times on a perpetual tour. From 2006 through 2008, he spent a lot of time on airplanes, traveling the world performing for Warwick Basses. For the past few years, he's been releasing music directly to subscribers, performing a series of web concerts, and hosting a music podcast.

In all that time, he has been fortunate enough to be compared to Martin Sexton, to open for David Wilcox more than once, and to have released six albums to fans who actually bought them (!!)

Seth has played at the Burren more than any other venue in the world, and is thrilled to be coming back!

Armed with a 4 string bass a quick wit and an entertainment value that is uniquely all his own, Tom Bianchi as a solo artist or a band leader never lets and audience down with his ability to eclectically adapt to any situation.

Each 24 Hour Tom performance is like a unique recipe.  The ingredients are one part musicianship, one part host and storyteller, an eclectic mix of songs, add some humor and improvisation, mix well and enjoy.

Tom Bianchi has made himself a well known icon of the music scene in Boston area as well as all throughout New England. Sharpening his teeth as a subway musician, and as part of the prestigious Quincy Market Street Performer’s program, he has played stages from the humble Park Street Train Station to historic Club Passim in Harvard Square and The Somerville Theater on many occasions.

These days as a soloist Tom performs at many club venues and house concert series and also enjoys his weekly haunts at The Burren in Somerville on Sundays and Toad on Thursdays.