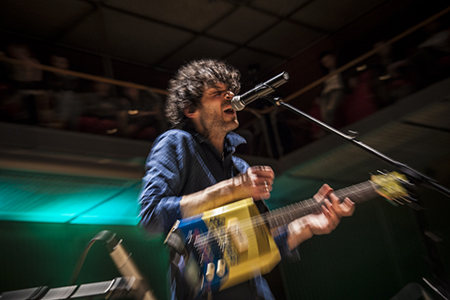 Will Dailey is an acclaimed independent recording and performing artist and artist advocate. His sound has been described as having a rich vintage vibe while having a firm appreciation of AM rock, pop and big hooks leading famed Rock journalist Dan Aquilante to call him “the real deal”. Dailey's last album was met with stellar reviews, over 9 million spins on Spotify, top 20 on Billboard Heat Seeker chart and won Album of the Year in the Boston Music Awards, New England Music Awards and Improper Bostonian Magazine. Dailey, who is already a three-time winner of the Boston Music Award for Best Singer/Songwriter also won Artist of the Year in 2014 and best male vocalist in 2015 and 2016.  Most recently in 2016 he shared the stage with Eddie Vedder in Chicago and Boston, supporting him on stage for the Hot Stove Cool Music Benefit where Vedder had Dailey play some of his own songs and sing a few duets. He has also shared the stage with Willie Nelson, Roger McGuinn, G Love and Tanya Donelly. In June of 2013 he was featured on a Stephen King/John Mellencamp project produced by T Bone Burnett called Ghost Brothers Of Darkland County and, in that same year, also released an original song he wrote inspired by Jack Kerouac's Tristessa.  In September of 2013 he played his fourth Farm Aid Concert along side Neil Young, Willie Nelson, Dave Matthews and John Mellencamp. His new album, Golden Walker, was just released summer of 2018 and hit #1 on Billboards Northeast Heat seekers. The Boston Herald called the album: “A new peak.”.

Dailey has become an artist to watch not just now but indefinitely. “Dailey’s latest album makes it clear that good songwriting isn’t a matter of hiding behind shiny production or an over-stylized persona. His music doesn’t contain a note of pretense. If anything, it is committed to the beauty of simplicity.” - Jon Karr, New York Minute Magazine, May 2015

"11 tracks with a ’70s vibe for a modern age — gliding synths, amusing instrumentation, and enthralling lyrics — the record entices listeners to engage with the individual lesson of each song."  Cowboys & Indians

"Dailey is in-tune to an era (1970s) when singer-songwriters were the true stars of popular music — he then reshapes the structure of a song for the 21st Century." - Goldmine

Matthew Connor is a crooner for the 21st century, writing heart-wrenching songs that combine the windswept ideals of classic American balladry with stark depictions of modern-day alienation. The Boston-based Connor has a haunting voice that conjures ghosts of past heartbreaks, and he pairs it with spectral guitars that recall country tearjerkers and alt-pop brooding. Connor, who also writes film scores, has proven himself adept at crafting intricately wrought mood music that grabs the most painful parts of his listeners’ souls, then soothes those wounds with his knowing lyrics and evocative voice.