Padraig Stevens with Leo Moran of the Saw Doctors 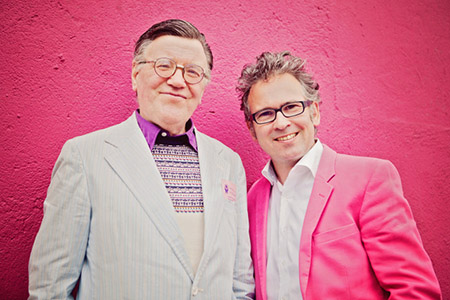 Like a parent of  famous children, Padraig Stevens is much less well-known than his songs are. He is co-writer of the 1990 hit ‘I Useta Lover’ – not just Ireland’s best-ever selling single but also voted Ireland’s favourite ever number one by listeners to the national radio station, Today FM.

Christy Moore recorded Padraig’s ‘Tuam Beat’ and used it as the lead track of his 2016 album, ‘Lily’. Subsequently the song has been a huge dancehall hit for Michael English and more recently Padraig’s ‘Streets Of Galway’ has been topping the Irish charts for Stuart Moyles.

‘I Useta Lover’ was just one of his writing credits with The Saw Doctors – others include ‘That’s What She Said Last Night’, ‘Same Oul’ Town’, ‘Good News’, ‘Maroon And White’ and his very own ‘Still The Only One’, amongst others.

His involvement with The Saw Doctors pre-dates the band and originated with another group, Blaze X, which was the flame that sparked the existence of The Saw Doctors and it was back then that Padraig and Leo Moran first met, at a band rehearsal in The Tuam Youth Club. Leo was a young teenager interested in finding out what kind of a racket the slightly-older but familiar local lads were creating. Padraig had recently returned from his emigration to London and he was wondering the same while offering his more experienced help, having been a drummer and involved in bands and music since his youth in Tuam.

The racket was serious; melodic, powerful and aggressive, Leo was amazed to discover that the very music he loved from abroad – The Stranglers, The Ramones, The Jam et al, was happening in his own home town in the West Of Ireland.

Padraig, who was writing songs already, took up the job of the band’s manager and his song ‘Summergirl’ was planned to be Blaze X’s follow up single to their début, ‘Some Hope’ but they broke up before it came to pass. The original ‘I Used To Love Her’ was a Blaze X favourite that was added to in order to complete the subsequent smash hit.

Padraig returned to London for another spell and Leo played with the McHugh brothers, Mouse and Cuser in bands by the names of ‘The Mix’ and ‘The Definite Articles’ before playing rhythm guitar in local reggae outfit, ‘Too Much For The White Man’, a band that formed when Mouse and some of his musical friends arrived home from their own spell in the British capital, having fallen in love with all things Jamaican.

On Padraig’s return to Ireland in the late 80s, Leo had teamed up with Blaze X’s Davy Carton and Davy’s next-door-neighbour, Mary O’Connor to work on the collection of fine songs that had been left-over from the band’s time as well as to write new songs.

Padraig joined in and with the help of John ‘Turps’ Burke they started writing together and recorded Davy’s ‘All I Ever Wanted’. Mary emigrated to England and The Saw Doctors obtained a six-week Winter Tuesday night residency in The Quay’s Bar in Galway where they were spotted by Mike Scott of The Waterboys, who were ensconced in Spiddal House out the road recording their ‘Fisherman’s Blues’ album at the time.

Mike liked what he saw and heard and asked The Saw Doctors to come on tour as support, first around Ireland and then around Britain.

Padraig’s songs like ‘Drive Away’, ‘The Streets Of Galway’, ‘Buffs’ and ‘Midfield For The Stars’, among others, were serious favourites of the small but enthusiastic bunch of fans the band managed to play to at that time.

On returning to Ireland after The Waterboys tour, Padraig left to pursue his own path while Leo stayed on with The Saw Doctors whose luck with ‘I Useta Lover’ gave them a platform from which to build a fanbase not just in Ireland but in Britain and the USA as well.

Padraig’s first solo-album, ‘Sound’, is a well-loved and respected collection of top-of-the-range song-writing as is his second, ‘Puddles And Rainbows’. His songs are born between the second-half of the twentieth century and the present, capturing and celebrating the culture and the vernacular of  the Ireland’s changing landscapes from then until now viewed from the various perspectives of his childhood in the shadow of Ben Bulben in Grange in Sligo, his youth on the farm world in Corofin, Co Galway, his later adolescence immersed in the showband and relief band scene in the town of Tuam, his experience as an emigrant in London and as a returned emigrant in later years.

Having toured with The Saw Doctors at the start of the new millennium, Padraig also collaborated with Leo when they recorded a collection of songs about gaelic football under the name ‘The Folk Footballers’ to celebrate Galway’s appearance in the 1998 All-Ireland senior football final.

His new and third album, ‘News From The Old Country’ carries on where ‘Puddles And Rainbows’ left off.
http://www.padraigstevens.ie/
http://sawdoctors.com