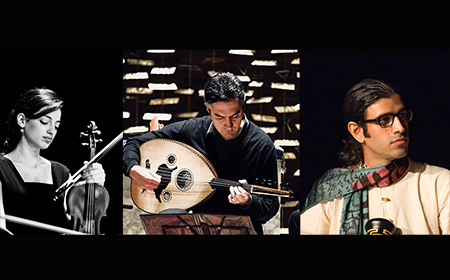 Folk and Dance Music From Where the Sun Rises

Anatolia, derives from the Greek word anatolḗ, which means ‘where the sun rises’. In this project, we will be presenting folk and dance music from Anatolia, modern day Turkey.

Raised in the Western classical music tradition, Ceren Türkmenoğlu is a violinist who is always aiming to engage other genres of music as much as possible in her repertoire and expand her musical language with the music of other traditions, especially her own, Turkish Classical Music. She has been a member of Ankara State Opera and Ballet Orchestra and Istanbul State Symphony Orchestra in Turkey and since January 2017 she enjoys continuing her performances in Boston as a recitalist, chamber and orchestra musician both in classical music and Turkish traditional music.

Efe performed with various Turkish Music Ensembles in Washington, DC and Chicago before moving to Boston. He performs with Orkestra Marhaba and he is also a member of Cambridge Musiki Cemiyeti, where he studies various forms of Ottoman music as well as traditional instruments such as tanbur, kemençe and ney.

Shabanpour began playing Tombak (Iranian hand drum) at the age of eight. Later, he learned Daf (22" frame drum) from maestro Bijan Kamkar. He also studied various styles of playing frame drums from different regions of Iran. Pouya has performed with different ensembles from different countries in Middle East. He is interested in experimental rhythms and sounds that engage the audience in new musical experiences.