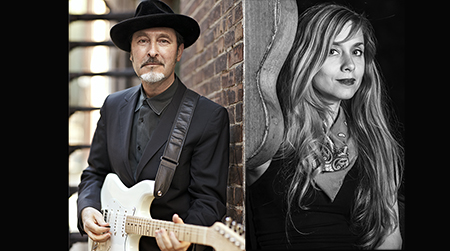 “A muscular blues-rock behemoth that cuts like a razor on Vaseline - Parcek is a blues original who is deeply inspired by first-hand encounters with everyone from Delta progenitor Skip James to British Invasion guitar master Peter Green.” - American Blues Scene

“Parcek rubs shoulders with those North Mississippi boys and their pals and shows he knows his way around a song stack as well as he does turning his amp up to 11.  A certified guitar slinging white boy with the blues, he handles John Estes as easily as he does Robert Hunter.  Hot stuff for audiences bursting at the seams for a dose of same, a sonic, dizzying, psychedelic-blues excursion” – Glide

“Parcek is tasteful, melodic, and spellbinding and takes us all to school. Every second of Mississippi Suitcase contains this same level of understated greatness and deserves a chance to be permanently installed in your musical consciousness. Peter Parcek has quietly mastered every nuance of the blues and will touch the innermost part of your being. Listen to this record daily for at least a year.” - Rock & Blues Muse
http://www.peterparcekband.com/

Danielle Miraglia comes armed with a strong steady thumb on an old Gibson and an infectious stomp-box rhythm with tunes ranging from heart-felt to socially conscious that will move both your heart and hips. Her latest “Bright Shining Stars” debuted at #15 on the Billboard Blues Charts. Cascade Blues Association calls it "... tough as rawhide, but smooth as blended whiskey."  Released Oct 2020 with Vizztone Label Group, it's a solo acoustic folk/blues record that highlights the one-woman-band live sound she’s honed over the years, featuring guest appearances by talented friends Laurence Scudder, Peter Parcek and Richard "Rosy" Rosenblatt. It includes originals as well as a collection of songs she covers at live shows, paying homage to influences like Big Bill Broonzy, Bob Dylan, Janis Joplin and more, plus the title track "Bright Shining Stars," written by her husband, Tom Bianchi.

"Americana and blues practitioner Danielle Miraglia wisely avoids fuss and clutter on her latest album, Bright Shining Stars. Fingerpicking and strumming on acoustic guitar are central to her sound, with percussion frequently provided by the infectious stomp of her foot. Three of the 11 tracks here are solo recordings, reinforcing a truism that the artist frequently has proven on Boston-area stages: A charming voice and fluid guitar prowess are all an artist needs to keep a listener rapt." - Bobby Reed, Downbeat Magazine

"Straddling the line where folk/roots meets rock/blues, Miraglia has a voice that can go from a raspy come-hither purr to an Etta James-esque powerhouse belt, although she may be best known for her lead thumb — a heavy, thumping strike on her Gibson that’s backdrop percussion in itself." - Lauren Daley, The Boston Globe
http://daniellem.com