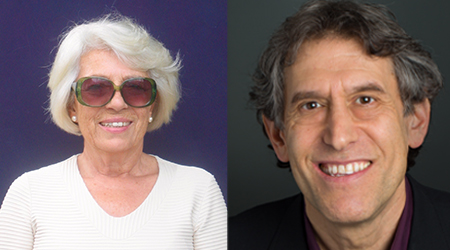 The Music of the European and Mediterranean Cabaret, with vocalist Eleni Odoni and pianist Hankus Netsky.

Vocalist Eleni Odoni has performed extensively with pianist Ran Blake and has recorded with Ran Blake, Pedro Sarmiento, Claire Ritter, and Alan Hall. She is also a political scientist, a retired college teacher, a writer and a frequent translator of French and Italian into English or Greek. Until last December, she co-chaired the Greek Study Group at the Center for European Studies at Harvard University.

A multi-instrumentalist, composer, and ethnomusicologist, Hankus Netsky is chair of Contemporary Improvisation at New England Conservatory and founder and director of the Klezmer Conservatory Band. He has composed extensively for film theater and television, and has collaborated closely with Itzhak Perlman, Robin Williams, Joel Grey, Theodore Bikel, and Robert Brustein. An artist at home in many musical styles, he has recorded on Sony, EMI, Rounder, Vanguard, Tzadik, Wild Garden, and Traditional Crossroads.